Hey everyone,
I wanted to take some time today to talk about my creative method of taking notes and distilling ideas to the core. I think it’s interesting, especially for myself, to have some insight on how I am using my bullet point diary, my DM journal and my computer notes together. I think this can be greatly improved, but it’s working quite well for me already.
I always carry multiple journals with me when I go out of the door:
·         My DM journal, most important and gets the bulk of my writing. In this I write ideas and encounters for games and for this blog and I doodle some interesting locations. I have filled my first DM journal now in about 1 year and 3 months (but most of it was done the last 4 months).
·         My creative, bullet point diary. I have one notebook where I keep track of my ideas, what I’m working on, what I’m thinking about, what I’m enthusiastic about or not. I really like this concept, because it makes me feel accomplished if I’m thinking of a lot of ideas, even if I don’t work them all out. Also I can flip back and see what ideas I have forgotten and why I’m not working on them anymore.

·         My computer notes are just random and I never look at them anymore. But sometimes I find some interesting things when I do search for something.

Basically, the bullet point diary gives a quick overview of what I’m thinking of and toying around with. My DM journal is to work those ideas out in practical use, while my computer notes are to work things out in great detail.
What I would like to do more often is to go back into my journals and see what inspires me in these journals and what is not inspiring to me. The diary helps me to give a quick overview to see what I was enthusiast about, the DM journal can help going into more detail about these topic, while I make notes of my favorite inspiration on computer notes. This helps me boil down the likeable subjects to a bare minimum and start building on those core items again.
I’ve done this before out of some ideas I was toying with and this is what the core looked liked:

·         Dreamsalt - A mineral that makes you have the best dreams, but can have side effects.

·         Gwinel – A cleric of Glim, also part of the Illan’s Ignited, who is always interested in magical items, and identifies for some coin/trade.

Posted by Thomas at 5:50 AM No comments:

Here are the next nine regions of my Inktober challenge, made into the continent of Lish-Ahab. It ended up a bit more rectangular than I wanted and there are some empty spots that still need to be filled, but I’m pretty content with it. My scanner broke and I had to work from pictures made with my phone, but I hope the drawing is clear enough. I will continue with an explanation of this continent underneath the drawing! 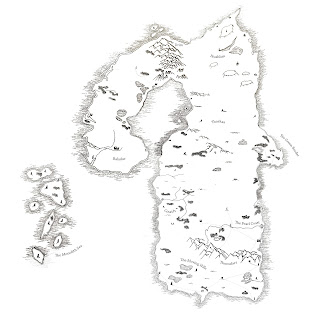 Let’s start at the top-left.

Next up is Ravinol and Boulin-de-Ravat, an Elven Empire and a Human Empire, on the continent of Raqda. I will post them in a few days.


The living gardens of Elslo are fabled. In ancient times this was the domain of a wizard or king that built a tower in the midst of a blossoming garden, alive with creatures. Now the garden is still there and many try to get into the tower. It's not an easy task though.

The gardens are surrounded by:

The gardens are alive with:

You encounter in these gardens:

In the tower you find:


The great monoliths that stand between the mountains, on the plains, in the old forests, were built by Dwarfs. They carved their runes deep within the pillars, sometimes making entrances and rooms within. Some of the monoliths rise up to 60 ft high, while the highest that I encountered was about 110 feet. These strange pillars resonate the thought of the ancient Dwarven kind. Dwarfs have lost the ability to craft and enchant them since. We call these ancient folk the Monolith Dwarfs.

The Monolith Dwarfs were:
1. Jolly people who put a large emphasis on community building.
2. Always in war against the terrible creatures from beyond this world.
3. Clockwork fanatics and engineers of electrical spells.
4. Giants, compared to modern Dwarfs, who put effort in building architecture.
5. Cousins and friends of Elves until humans drove the two apart.
6. Bright wizards slowly corrupted by Earth Elementals.

Posted by Thomas at 6:05 AM No comments:


Hey everyone, I wanted to post this yesterday, but I found myself unable to do so. Here's my first three inktober maps though, combined into the continent of Waldenar. 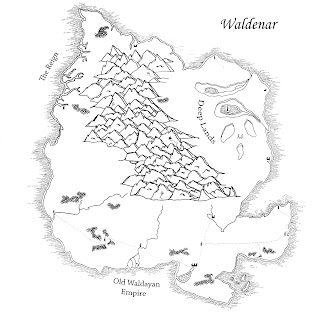 I wrote some text about this continent, which I will post here.

The Old Waldayan Empire is the western part of the Empire. The capital lies on Waldenar, just like several other towns andere cities. There is a road built between these:
• Wyr, the capital of the Waldayan Empire. Lies on an inland bay with access to the sea.
• Raltir, the second city of the Empire, with close access to The Reign and a river that brings you to sea.
• Thevon, this town in a major port to Eastern Waldayan.
• Deepwind Heights, built on a cliff, many mages and nobles make home here.
• Aldris, a crossroads town between Wyr, Raltir and the coastal towns. Important for land trade.
• Orsis, built next to the delta, this town is great for adventurers.
• Elm, an elven town in the forests. They live isolated, but accept travelers.
• Horn, at the west coast. Also called: the town at the end of the world.

Next to that there is the ruined elven town of Windolas that did not accept the rule of Wyr. It's located in the south-east.

The Reign is a mountanous area in the middle and north-west of the continent. Many dwarves live in these mountains, they trade with but are sometimes to hostile to the Empire that is encroaching. There are two empire outposts in the Western side.
• Jal'gabur, the dwarven city is located near the Deep Lands
• Ar-thotr, on the border to the empire. Trades minerals.
• Jal'folom, town near Deep Lands, isolated.

• Free city of Thuvelis, on the north coast. Thiefs and exiles here of all ancestries.

The Deep Lands have once been scarred by magic. Now dust storms blow into large chasms. There are two cities, two ruins and a weird tower here.
• City of Sandwatch. Hosts the Sentinels of Sand, paladin order.
• Town of Lightpost, a town built by recent colonists that want to travel deeper and further.

• Whisperbeach, ruins of a town. Citizens travel the wastes now.
• Hillview, located within an ever going sandstorm. No way in and out normally.

• Tower of Gulliner. Gulliner was an Earth evocation mage but his power collapsed the ground around the tower.

I am now busy with the continent of Lish-Ahab, but it consists out of 9 regions, so it will take a lot more work!

Posted by Thomas at 3:05 AM No comments:

The Ledger of Merchant Rulm


Rulm always wanted to be an adventurer. But with many threats looming on the horizon, he started a shop in town with adventurers gear to equip them for the battles ahead. The heroes never came and the shop became a meeting point for locals. Rulm started to sell iron tools and other items and the equipment disappeared into the storage. There is still one glass case for magic items in a corner of his shop.

In Stock
Roll 2d10. The number you roll determines which items he has (the first d10 for the shop, the second for the storage). For example if you roll a 7, he has the horse shoes (1) to the leather gloves (7).

Buy
Rulm is happy to buy from adventurers and will go long ways to do so. He has no use for most gear, but if it’s reforgeable or can be used in different ways he will look into buying it. He has a stash of 300 gold to buy from.

The Embershade village lies on the edge of the Embran Woods, and the town was named after this forest. In the next 6 months I would like to take a closer look at Embershade Village. It’s a place where people live their life without the mingling of kings, governors or bureaucrats. There is certainly much to be done, in the way of adventuring and safety in the area. Threats are looming. But even in dire times, the villagers see their possessions as communal and share between each other. How will this work out for them?

Let’s plan out the village first.

There are some skill/ability challenges in the town:
STR: Help to roll a boulder off the road in the north.
DEX: Climb down the dried-up well. It’s a slippery slope.
CON: Help build a house in the village. Exhaustion looms.
INT: The wizard tries to learn you some arcane. Do you understand?
WIS: Scan the area for threats from the watchtower.
CHA: At the village meeting, convince others.

That’s already a lot of things. Here’s a map I drew of the village.
More will come next month, where we name people and give them wants/needs and dislikes.

Posted by Thomas at 1:52 AM No comments: